You are here:
ArticlesRiver Rafting 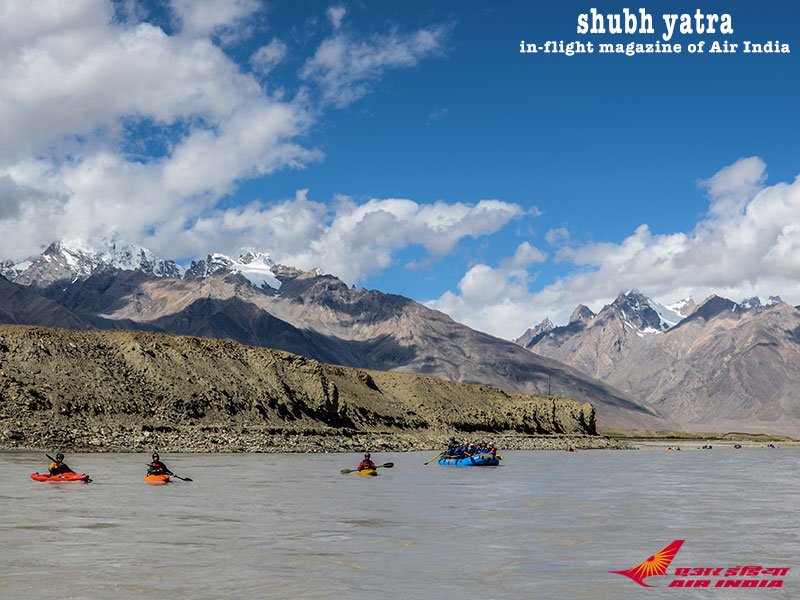 Believed to be one of the most challenging river-rafting experiences in the world, riding the great white waters of the Zanskar in Ladakh is a heady cocktail of thrill, skill and pumping adrenaline, says Ranjan Pal in this Article for Shubh Yatra – the in-flight magazine for Air India

Ladakh. A land of incomparable beauty – stark yet stunning. I have marvelled at this region’s craggy peaks, multi-hued mountains and impossibly blue skies on several trips. But this time, I am aiming for a more down-to-earth experience. A fish-eye view, one could say, from River Zanskar. Considered one of the most spectacular white-water trips in India, rafting here is the crowning achievement in any serious paddler’s list of river descents.

Details about our Yearly Adventure – The Zanskar River Rafting Expedition

There are several reasons for this. To begin with, there is the three-day drive to the put-in point at Remala, which takes you through some of the most surreal mountain sceneries imaginable as you traverse the rain shadow area of the trans-Himalaya. A bonus is the opportunity to appreciate some beautiful and remote Tibetan monasteries, the most stunning of which is the Rangdum monastery, sitting on a giant floodplain surrounded by the towering crags of the Zanskar range. Secondly, the river itself can only be run for a few limited months in the year, when it is not frozen over and the weather is warm enough to make an attempt. And even then, one has to wear a full body suit, splash jacket and boots because the water chills you to the bone.

Finally, the core of the trip is an exhilarating Class III to IV ride through then extremely desolate, remote and sheer Zanskar gorge, with walls rising a few thousand feet above the river bed, truly deserving the name Grand Canyon of Asia.

We arrive at the banks of the Stod, a tributary of the Zanskar. The weather is clear and the water looks inviting. Our group is a perfect mix of Indian and international guests. It’s a friendly bunch – while many have come on their own, they will leave with new friends and memories. The bonding on these rafting trips is instantaneous – the combination of being out of your comfort zone, in an unfamiliar and wild environment and among like-minded strangers is potent.

The first two days hold no surprises, except the fascinating landscape. The wind has eroded the river bank into steep, sandy columns that look like they could collapse any minute. All around, the mountains with their incredible formations and striations are an ever-changing kaleidoscope of colours. At night, we camp under the stars on meadows flanking the river.

By the third day, the pace begins to pick up abruptly as the river enters the Zanskar canyon, with its soaring walls of multi-hued stone. The rapids here become increasingly bigger and more frequent, and commands from Sanjay, our guide, come fast and thick as we encounter several Grade III rapids. There is not a living thing in sight and we have no way back if we run into trouble. We pull the raft over to a point where the gorge narrows dramatically. Around the corner, a dangerous new rapid has been formed by a rockslide and needs to be scouted carefully. Recce over, we are off again, just behind a group of intrepid Spaniards in the lead raft. Suddenly, all hell breaks loose as a giant wave catches the Spanish Armada and decimates it in an instant. We are narrowly spared as the big Grade IV monster claws at us with its watery fingers. The Basques are quickly pulled out of the water and their capsized raft turned up. But worse is yet to come. Lurking right in the heart of the Zanskar gorge is a terrifying obstacle called the Constriction. This is a narrow 18-foot gap where the walls of the canyon close down from either side and through which the powerful river has to force itself. Innocuous from above, the force of the Constriction has lured many an unwary raft to a watery grave.

The next day, the tension in the raft is palpable as we back-paddle into a spot of calm and await our turn to run the gauntlet. Bending diligently over our oars, we strain to hear the brusque commands of our guide. We pull hard on our paddles. The awesome power of the river surges beneath me and the roar of the water is deafening. The massive surge carries us forward and we are almost through when suddenly, the fierce power of the river slams us up against the rock wall on the left. In an instant, the raft tilts sharply to the left and the river pours in. I clench the safety rope with all my strength but feel my grip slipping. The next second it is all over as the boat flips and we are thrown into the ice-cold water. Blackness envelops me and sheer panic sets in as I thrash around blindly. But the rescue team (following us) is quick and the upturned raft is corralled and pushed over to the shore. We collapse on the rocky bank, gasping and chilled to the bone.

Once we are back in the raft, we paddle on and are soon at our lunch halt, where a gorgeous aquifer spreads itself like a watery fern. The contrast between the warm, sunny heaven we are in and the cold, watery hell we escaped could not be more marked. But we have survived and the memories have been etched forever.