6 Reasons to Run the Siang by Vaibhav Kala 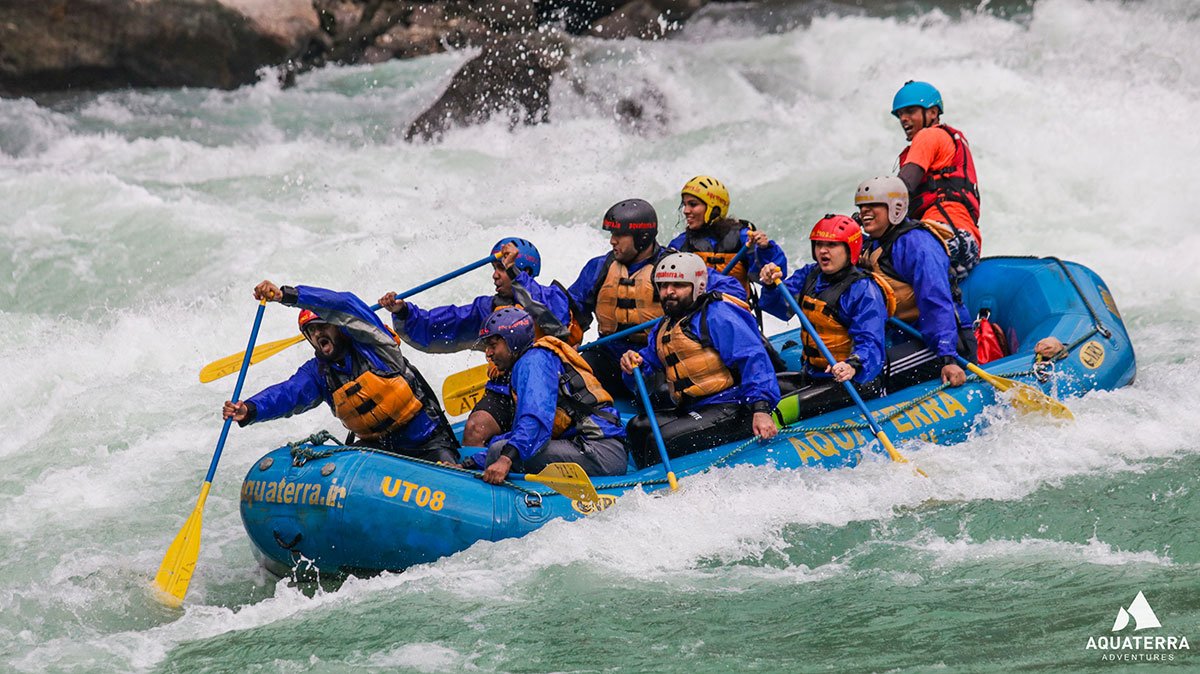 6 Reasons to Run the Siang by Vaibhav Kala

A Few Reasons Why You Should Run The Siang..

For those not already familiar with this north eastern river, the Brahmaputra flows for hundreds of miles across the upper reaches of Tibet, before it enters India. It commenced its journey perhaps a millennium ago as the Yarlung Tsangp, much like a ribbon, creeping through the barren with a golden track. Before it enters the state of Arunachal Pradesh, it narrows at a gorge it has sliced over centuries between two giant Himalayan mountains; Gyala Peri (24,443ft) and Namche Barwa (25,445ft), the latter being the highest unclimbed mountain in the world. Here, it also takes a big loop to change its easterly course to southernly – this is called the “Big Bend”. This gorge is practically untrekkable and unchartered. Its total length is contained in a 25 mile upper gorge, potentially a death zone with 30ft waterfalls and continuous Grade V+ rapids. The 15 mile inner gorge has walls as high as 3000ft while the 80 mile lower gorge has similar characteristics. The Tsangpo, in this gorge pushes volume upto 2,00,000 cubic feet per second (cfs) and drops at a rate of 150ft per mile. The Colorado river in the Grand Canyon drops at 7ft per mile.

Part of the lure of the Siang is its remote location and incredible early exploration but here are some reasons why it’s a big draw for adventure travelers of all skill levels thanks to its white-water and epic proportions of scale, size, scenery.

Here are just a few reasons a Siang Expedition is a must-have experience, plus some tips on how to make one happen.

Experience the natural spectacle, you will witness landscapes like nowhere else!

Every year, new species are found in this amazing part of India. The three banded rosefinch, the white cheeked macaque, new lizard species, new species of primates, the new cascade frog, 2 new ant species, tiny frogs, geckos, new fish species, even a new snake discovered in Arunachal Pradesh named after Salazar Slytherin from Harry Potter! Out of about a thousand species of orchids in India, over 500 are to be found in Arunachal Pradesh alone. Where else can such abundance stay preserved, except Paradise?

You will be rewarded with wilderness, the likes of which you have not seen, outside the rainforests of South America. The thich undergrowth, cloudforest, and the 2 day drive up the valley passing small village settlements makes for a fascinating insight into this region. Bamboo and cane bridges, local huts set on stilts, terraced farms, all make for a heady delight.

You’ll witness the scale of water you have not experienced

The expedition takes you through remote hillsides dotted with tribal settlements in clearings surrounded by leech-infested rainforest. It negotiates the finest big volume white water in an area, which is surely one of the most inaccessible in the world. You will feel small in the grand scale of things, overwhelmed but end each day, exhilarated!

You will paddle with Siang experts and world-class outfitters

Experienced whitewater guides, with the right safety back up, equipment to go self contained, adequate supplies and camping skills, enhance your experience. Paddling the Siang is as much about the river’s scenery and its challenges, as the beauty of its incredible camping spots. We get you onto untouched beaches, that are larger as you can ever imagine the largest river beaches to be! For millenia, the upper gorges have been the traditional hunting grounds for the Adi people, who still use it, for hunting or catching beetles by the riverside and yes, we will see them too.

From a Tibetan monastery, to cane bridges, amazing beach camping, untouched gorges, 2 days of amazing drive up the Siang valley, and world class whitewater, you get a riveting adventure!

1880 : Kinthup, a Sikkimese explorer launches a four year odussey to chart the Tsang Po gorges, up the valley we will be traveling.

1889: Kinthup’s expedition report places a 150 foot waterfall on the Yarlung Tsangpo. Waterfalls on the river will intrigue explorers for more than 100 years.

1911: British explorer F.M Bailey fails to reach “Kinthup’s Falls” from China. British adventuirers Noel Williamson And J.D Gregorson are killed by Abor tribesmen near the Brahmaputra (Tsangpo) in north east India. The British retaliate, pushing back the Abors and opening the lower gorge to outside exploration.

1913: Bailey and Henry Morshead reach Pemakochung to find only a 30 foot waterfall. Later, Bailey learns that, during translation, a scribe erroneously placed the 150-foot falls on the main river instead of a stream feeding the main river, as Kinthup had intended.

1926: Kingdon Ward publishes the classic account of his Tibetan journey, the riddle of the Tsangpo Gorges (reprinted in 2001 with new chapters by Kenneth Cox, Kenneth Storm Jr., and Ian Baker)

1930: Kingdon Ward receives the Gold Medal of the Royal Geographical Society, in part for his Tsangpo gorges exploration.

1950’s-60’s: A major earthquake destroys the monastery at Pemakochung, It is never rebuilt. Escaping Chinese rule, thousands of Tibetan refugees travel through the Tsangpo gorges to India.

1987: Chinese army photographer Che Fu snaps a series of pictures of Hidden Falls while flying over the Upper gorge in a military helicopter – the first images of the falls.

1991: An Indo-Japanese expedition attempted to run the Siang from Gelling followed by a couple of private expeditions shortly after, for closed group 1992: American explorer Richard Fisher, the first westerner permitted to enter the region since 1947, scouts the upper gorge and the Po Tsangpo for an expedition the following year.

1993: In April, Americans David Breashears and Gordon Wiltsie reach the Great Bend. Breashears climbs the ridge to Senchen La and sees a large, unidentified waterfall in the Upper gorge. Baker, Storm, and others, as part of Fisher expedition, become the first Westernersto traverse the upper gorge since 1924. In September, Japanese kayaker Yoshitaka Takei drowns while paddling near the confluence of the Po Tsangpo and the Yarlung Tsangpo.

1994: 2nd Mountain Division mounted an expedition to run the 1st and 2nd descents of the Subansari, the Siang and the Lohit river, encompassing all major tributaries of the Siang, which form the Brahmaputra

1997: In August, Ken Storm and others explore the gorges and observe a large unnamed waterfall about a quarter mile below Rainbow falls.

1998: In April and May, kayakers Scott Lindgren and Charlie Munsey paddle seven miles of the Po Tsangpo below Pelung. In September and October, a National Geographic sponsored expedition led by Wick Walker and Tom McEwan attempts a kayak descent of the Yarlung Tsangpo through the upper gorge.

American paddler, Doug Gordon drowns a few miles below Gyala. In November, Storm, Baker and National geographic filmmaker Bryan Harvey reach and name Hidden Falls of Dorje Pagmo, the waterfall spotted in 1997, and measure it at 110 feet. Storm measures Rainbow Falls at 72 feet – nearly twice the height estimated by Kingdon Ward in 1924. Two weeks later, the Chinese reach the waterfalls for the first time, on foot.

2000: In June, an mud dam caused by a landslide breaks in Tibet and a wall of water 52 metres high comes crashing down the valley, shaving of forest and depositing sand in the fields. All bridges are destroyed and the river backs up 12 kms on the side valleys. In the Lower gorge, there were no shorelines left.

2002: In February, the Outside Tsangpo expedition team, led by kayaker Scott Lindgren, completes the first whitewater descent of the 70 km long upper gorge. In November, the Great Brahmaputra Descent expedition operated by Aquaterra Adventures, becomes the biggest ever descent of the Upper Brahmaputra till date. This is a first descent of sorts, after the big flood of June 2002.

2002 onwards : Aquaterra Adventures ran expeditions each year since, helping in opening up the area to adventure tourism. First complete descents of the Lohit and Subansari were made, besides being the only outfitter to offer guaranteed departures on the Siang each year, and the only commercial open descents down the Ningguing and Marmong gorges. For this pioneering effort, in November 2007 ; Aquaterra Adventures makes it as to the list of the world’s best adventure travel outfitters in the first Authoritative Rating of Adventure Tour Operators, selected and conducted in a global survey by National Geographic Society. We made it to the list in 2009 as well, the only Indian adventure travel outfitter to make it two years in a row.

If you think you want a part of this adventure, write in to info@aquaterra.in