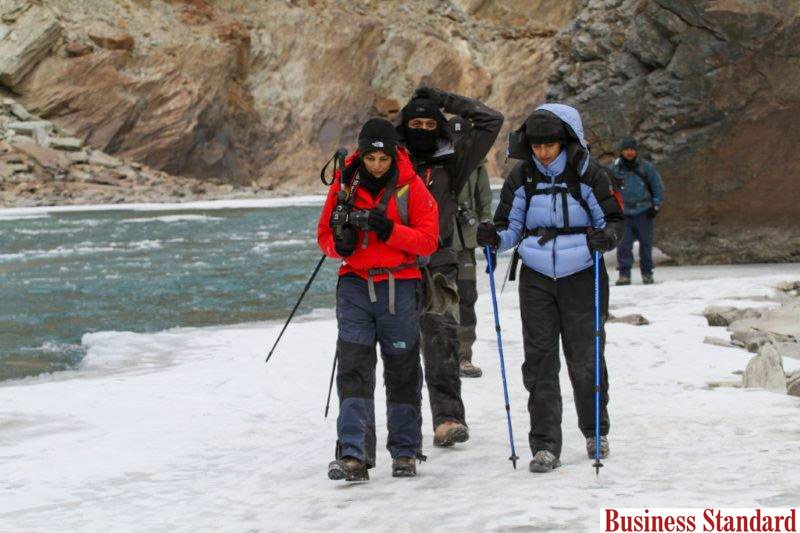 The fact that this trek starts from a village called Chilling is an indication of things to come. With freezing temperatures of minus 30 degrees and a precarious walk on the frozen Zanskar river, the Chadar trek promises an experience like no other.
Zanskar, a remote valley in Ladakh and the fabled land of the white copper, is famous for its snow leopards, ibex, black wolves and the rare Himalayan blue poppy. But this mysterious land has no entrance. Two rivers, which flow through it, come together to carve a gorge so deep that one can’t travel down it to enter or exit the region. In summer, the melted snow fires the rivers to a raging frenzy, making the gorge and water routes impassable. The one route is through the Zanskar range of mountains, the high passes of which are closed for eight months. In such a scenario, the only way out is in the winter when a frozen white corridor, or chadar, is formed on the river, creating the only link between the locals and the world outside.

Trekkers usually plan this tour for months, getting the timing right to the dot. There are scores of travel companies offering guides for the tours, but you need to be careful while selecting one for this extreme trek. “You can tell a good guide from the rest from the number of days he offers for acclimatisation,” says Karn Kowshik.

The hundreds of trekkers thronging to the frozen river have ended up making the ecosystem fragile, with garbage being thrown freely. The Ladakh Council has now limited the number of trekkers in each group to 10. “There were guides from some travel companies who were taking up to 25 people in a group. Greater control is being exercised now,” says Fay Singh, head (operations) of adventure travel company Aquaterra Adventures. Aquaterra runs treks from Delhi to Leh, including the Chadar trek, which offers a glimpse of the monasteries dotting the landscape, overnight camping at Teeb cave, lunch atop a steep canyon, a day with the colourful folk of the Nyrek village, and, of course, the famous Chadar walk.